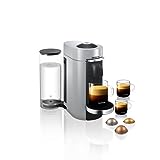 This review was specifically created for the Vertuo Plus but Nespresso has since released another cheaper version of this machine called the Vertuo Next. Having researched and tested both we decided that the Vertuo Next did not warrant a review on its own because they are both very similar and produce exactly the same quality of coffee.

The first and most noticeable difference is the price. The Next is Nespresso’s entry-level coffee machine that takes the Vertuo capsules and the Plus is a more premium machine but is it worth paying more for? What do you get?

Importantly you don’t get better coffee becuase they both have the same motor inside that delivers the coffee in the same way but what you do get is a better quality machine and more ease of use.

The next is more plasticky and the plus has things like a nice chrome drip tray where the next drip try is made of plastic and on the plus you have 4 levels that you can set the drip tray at for long and short drinks and on the next there are only 3.

The Plus also has a 1.2 litre water container and the Next’s is 1.1 litre. No biggie but it is a little smaller.

By far the biggest difference is the way in which you open and close then both to insert the capsules. With the PLus, you press on the lid and it opens smoothly and automatically into position. Press again and it closes. The Next has a manual and clunky mechanism where you have to move a dial to the left and it kind of springs open. It’s not a big deal but the Plus is much better in that respect.

Other than the way the lid opens and closes the other differences are minor so when choosing you just need to think about whether the manual opening bothers you and if it doesn’t then save some money and go for the Next.

SEE THE AMAZON PRICE OF THE VERTUO NEXT

With the exception of the very entry-level machines Nespresso goes out of their way to produce coffee machines which look good as well as produce good coffee.

The Vertuo Plus is one of their mid-range machines and they have decided to try something a little different from a design perspective by almost separating the water container from the machine itself.

The water container still needs to be linked at the base to the coffee machine in order to pump the water through the capsule and into the glass but they have created the illusion that they are separated which we think looks smart and creates a bit of a point of difference from most other Nespresso machines.

This model combines matt silver and black plastic which works well and creates a classy but understated coffee machine that will sit and look good on any work surface.

A very important point to remember is that this machine does not take Nespresso’s original POD’s, it uses the Vertuo capsules which come in 4 different sizes and have been around since October 2016. These are all covered in the quality of coffee section below.

Nespresso has cleverly built on its mantra of providing high-quality coffee as conveniently as possible. This is a fundamental reason that you will select Nespresso in the first place.

No mess and super easy. With the original capsules, you need to select the coffee that you require, for example, espresso or lungo. It’s a two-touch process which is hardly an issue.

But Nespresso has now taken this one step further removing one of those steps!

No longer do you need to tell the machine what you want, it already knows.

When you insert the capsule into the machine it will read the barcode on the capsule and know exactly how much water to deliver to give you a great cup of coffee regardless of whether it is an espresso or a 400ml mug of coffee.

Pretty amazing really. This truly is a one-touch device.

With the smaller original pod’s you kind of had to “click” them in once inserted into the machine and this is where Nespresso have improved again.

Two great improvements there in our opinion with the Vertuo capsules vs the original pods.

Once the lid is down, press the button on top and your coffee is delivered.

There are 4 different cup sizes depending on the capsule that you choose to use ranging from 40ml of water for an espresso all the way up to 414ml for a large mug of coffee.

If you prefer more or less water for your Nespresso then all you do is hold down the button when the water is delivered and when you are happy, release and that will be stored forevermore. It’s super easy to personalise exactly how you like it

This particular machine does not come with a milk frother so if your drink of choice is a cappuccino or a latte we would recommend a Nespresso aeroccino which will heat your milk up as quickly as it takes for the coffee machine to deliver your coffee. You won’t be surprised to hear that is also one touch.

If you don’t want to mess about with coffee beans or ground coffee and convenience is the most important factor then Nespresso is the way to go.

Here is a detailed video that shows the difference between the Vertuo Plus and the Vertuo Next:

This is a 12 out of 10. The capsule goes in and you press one button. The machine knows what type of capsule you have put in so it knows how much water to deliver

This is the ultimate in easy to use

Nespresso has taken it to another level with the Virtuo capsules. The original pods are great but the technology that goes into these is pretty amazing.

When you press the button, the capsule starts to spin at up to 7000 rotations per minute whilst the water pushes through the coffee into your cup

You get the best coffee flavour when the water is evenly distributed through the coffee and it won’t get much better when the coffee spins at that rate.

There are 25 different capsules to choose from across all 4 different sizes of drink.

Something that even the bean to cup manufacturers overlook is how the flavour of your coffee is impaired by over extracting the coffee. Over extraction means pushing too much water through the coffee for the drink type selected.

For example, an espresso generally requires 40ml of water so if you push 60ml of water through then the flavour will not be as good.

This a personal thing and depends on your lifestyle. The quest for the perfect cup of coffee can seem never ending, especially if you prefer to savour each mouthful of a high-quality dark roast. For a true coffee lover, there’s nothing more satisfying, more spine tingling, than a fresh brewed cup of Joe. But it can be tricky trying to mimic the taste of…