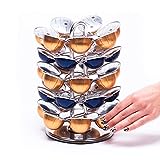 Is Patron XO Cafe Tequila Coffee Liqueur the best Coffee liqueur out there?

Everyone has heard of Bailey’s Coffee Liqueur and you have probably heard of Kahlua Coffee Liqueur both of which are readily available in the supermarkets but if you want to try something a little bit different and a bit more special, either for yourself or as a gift for someone else then you should consider the Patron XO Tequila coffee liqueur which is one of the best coffee liqueur’s out there.

Bailey’s is a whisky-based drink mixed with cream and Kahlua is rum-based and both are mass-market produced liqueurs that serve a purpose but can be a little sweet and harsh on the throat and not as smooth as you would like.

If you like tequila-based drinks then the Patron XO Tequila Coffee Liqueur is going to be right up your street.

Produced in the Mexican state of Jalisco which is known for producing some of the best tequila worldwide it is not produced in massive volumes like some of the other mass-market Coffee Liqueurs.

It makes a difference when something is produced in a small distillery in a family owned business so that it gets the love and care which produces something a little bit special.

Tequila can only be named “Tequila” if it is made using the blue agave plant as opposed to any other type of agave plant and it is native to the land in and around the town of tequila which the drink is named after.

If you come across “Mezcal” then this is another spirit which is similar to Tequila but cannot be given the official name because it is made with other types of agave plants that are not blue.

You may have heard of the infamous “Tequila Worm” which has historically been found at the bottom of some Tequila bottles. No need to worry about that with this coffee liqueur or in fact any Tequila made by Patron. They do not and never have added the worm to any of their bottles and it is in fact now banned by the body that governs the standards for Tequila.

In the UK we have all most likely encountered Tequila in the form of a shot so it goes straight down the hatch as quickly as possible but in Mexico, they prefer to savour the drink and sip it slowly especially when it comes to a premium product like the Patron XO.

Patron still makes Tequila the same way as it has been for many generations which involves crushing the blue agave plant with a 2 ton stone wheel to extract the juice before fermentation.

Take a look at the short video below to see how much care and attention goes into making each and every bottle of Patron and not just the tequila that goes inside each bottle but the actual bottle itself and the cork that goes in each bottle to create something truly memorable.

Other coffee liqueurs can be sweet and sickly but this is dryer and contains a much higher alcohol level than standard liqueurs.

Bailey’s, for example, has 17% alcohol and Kahlua 20% whereas Patron XO has 35% alcohol by volume making it about twice as strong but it is a very smooth drink.

This is very much a premium spirit being used in this liqueur with other Patron tequilas selling for hundreds of pounds.

It is also an extremely versatile drink that can be enjoyed in many different ways.

Straight up with ice is an excellent way to enjoy the pure flavour of this liqueur and it is a wonderful accompaniment to many desserts and is a real treat poured over some vanilla ice cream.

Where this drink really comes into its own though is when it is combined with some other ingredients to produce a cocktail.

Here are a few recipes that come highly recommended:

Add the ingredients to a cocktail shaker with ice, give it a good shake and enjoy. Garnish with a coffee bean for some additional authenticity.

Depending on how adventurous you are feeling, if you are in the party mood you can add some extra plain tequila which will really spice it up.

This one is super simple and we love it not just because of the flavour but the name as well because it is named after the region where Tequila is made.

Shake all up in a cocktail shaker full of ice and pour. Garnish with an espresso bean.

Everyone has heard of Irish coffee which is a shot of whisky-based liqueur added to black coffee so why not switch it up and try something a little different and go for a Mexican coffee.

If you have a pump espresso machine or a bean to cup coffee machine then pull a double espresso shot which is ideally 60ml and add to a tall latte glass.

Add a shot glass full of Patron XO café coffee liqueur to the double espresso and then top up with a little hot steamed milk and for the ultimate after-dinner indulgence, you could add some whipped cream on the top.

Who knew that a Coffee liqueur could be so versatile! Whether you go for it straight up with ice, pour it over some ice cream, convert it into an alcohol-based alternative to an Irish Coffee or use it as an ingredient for a multitude of different cocktail options this is going to be a fabulous addition to your personal drinks cabinet or a gift that will most definitely be put to good use by the happy recipient. What size coffee cup should I get? How much espresso should I order? These questions can seem overwhelming at times, especially if you don’t know where to start. Coffee is a beverage that has become very popular around the globe. There are many types of coffees out there, ranging from regular coffee to specialty drinks…

Whether about to confront the morning rush hour or ready to embark on a long hike, a good travel mug is a worthwhile investment. These can be large enough to be used as a water bottle or be small enough for your favourite coffee shop takeaway. Not only should it be leakproof, but it should… Any coffee lover will understand the importance of properly frothed milk in your morning coffee. Making coffee at home can feel like a real downgrade from your favourite local coffee shop. There’s nothing more disappointing than a watery latte or a cappuccino that is severely lacking in froth.  You may think the only way to…